Maslow, Herzberg and Pink's Motivational Theories in the Workplace

It's safe to say the pages of many motivational theory books have become a bit tired over the years. We've become accustomed to the seeing the same names floating around time and time again – not just Maslow and Herzberg, but McGuire, Winslow, McKellend and Drucker to name but a few.

Undoubtedly these motivation experts revolutionised the way we engage and inspire our workforces, but it's no surprise that, when fresh ideas come to light, the industry welcomes them with open arms. In this blog, we're looking at two established theories of motivation favoured by our workplace engagement experts, as well as turning our attention to one of the newer theories on the block and how these theories contribute to successful company cultures.

Psychologist Abraham Maslow first introduced his concept of a hierarchy of needs in his 1943 paper A Theory of Human Motivation and his subsequent book Motivation and Personality. This hierarchy suggests that people are motivated to fulfill basic needs before moving on to other, more advanced needs.

This hierarcy is most often displayed as a pyramid. The lowest levels of the pyramid are made up of the most basic needs, while the more complex needs are located at the top of the pyramid. Needs at the bottom of the pyramid are basic physical requirements, including the need for food, water, sleep, and warmth. Once these lower-level needs have been met, people can move on to the next level of needs, which are for safety and security. 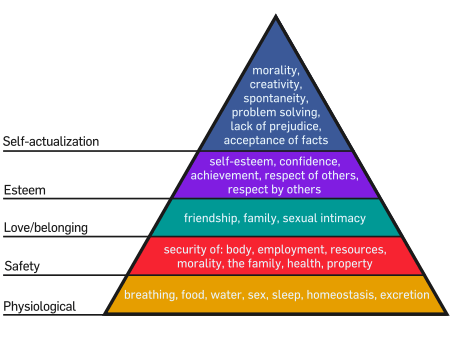 Every person is capable of, and has the desire to, move up the hierarchy toward a level of self-actualisation. Unfortunately, progress is often disrupted by failure to meet lower level needs. Life experiences including divorce and loss of job may cause an individual to fluctuate between levels of the hierarchy. Maslow noted only one in a hundred people become fully self-actualised because our society rewards motivation primarily based on esteem, love and other social needs.

Herzberg was the first to show that satisfaction and dissatisfaction at work nearly always arose from different factors, and were not simply opposing reactions to the same factors, as had always previously been  believed. He showed that the presence of certain factors truly motivate (motivators), whereas the absence of others tended to lead to dissatisfaction (hygiene factors). These hygiene factors need to be addressed and resolved before motivators can be effective.

Herzberg’s research proved that people will strive to achieve hygiene needs because they are unhappy without them, but once satisfied the effect soon wears off.

Examples of hygiene needs (or maintenance factors) in the workplace are:

True motivators were found to be other completely different factors, such as:

Hygiene factors are merely the launch pad – when damaged or undermined we have no platform, but in themselves they don't motivate. 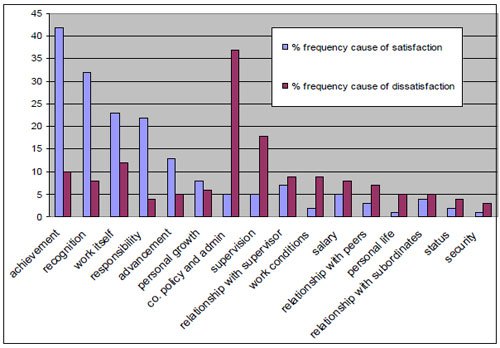 Frederick Herzberg’s book The Motivation to Work, written with research colleagues Bernard Mausner and Barbara Bloch Snyderman in 1959, first established his theories about motivation in the workplace. Herzberg’s survey work, originally on 200 Pittsburgh engineers and accountants, remains a fundamentally important reference in motivational study. While the study involved only 200 people, Herzberg’s considerable preparatory investigations, and the design of the research itself, enabled Herzberg and his colleagues to gather and analyse an extremely sophisticated level of data.

Motivational author Daniel Pink released his New York Bestseller entitled Drive in 2010. In the insightful work, Pink argues that the carrot and stick approach, while effective in the 20th century, is not relevant for today’s workforce. By combining scientific knowledge from the last 30 years with an appreciation of what today’s businesses actually want, Pink has devised a straightforward and modern approach which can be tailored to suit an organisations’ needs.

Focus more in the output, rather than the time or schedule, allowing employees to have flexibility over when they can complete tasks.

Don't dictate how employees should complete their tasks. Provide initial guidance and then allow them to tackle the project in the way they see fit, rather than having to follow a strict procedure.

This can be one of the hardest forms of autonomy to embrace: allowing employees some choice over who they work with. By providing open-source projects and tasks, they have the ability to assemble their own teams.

Allow employees to have regular creative days where they can work on any project or problem that they wish. Evidence shows that many new initiatives are generated through creative free time.

Create an environment where mastery is possible. To foster an envrironment of learning and development, four essentials are required:

Place equal emphasis on purpose maximisation as you do on profit maximisation. The attainment of profit goals has no positive impact on a person's wellbeing, and can actually have the opposite effect! Organisational and individual goals should focus on purpose as well as profit. Many successful companies are now using profit as the catalyst to pursuing purpose, rather than the objective.

This refreshing angle on motivational theory has been a topic of discussion for many in the industry, including Jevita Nilson - who, in an article from Checkside Online titled Motivation revamped: A summary of Daniel H. Pink’s new theory of what motivates ;us,supports Pink’s theory of self-determination.

Both Nilson and Pink explain that:

SDT proposes humans have an innate drive to be autonomous, self determined and connected to one another, and that when that drive is liberated, people achieve more, and live richer lives.

Nilson devised a number of initiatives around Pink’s revised motivation theory which can assist organisations to motivate their employees effectively - well worth a further read if you're a professional charged with engaging your workforce.

Content for this blog has been provided courtesy of the IPM and is incorporated into the IPM Diploma in Motivation. To find out more about the diploma or to enrol click here.