How travel is opening up opportunities for brands to surprise consumers

A trip to the moon? A driverless car guide around Times Square? We're exploring the travel of tomorrow.

Tourism has grown from 50 million international travellers in 1950 to well over one billion travellers in 2013. By 2030, this number is expected to reach 1.8 billion (source: UNWTO). We'll let that sink in...

This growth is fuelled largely by easier, more affordable travel - think cheaper cars and budget airlines - but as technology continues to advance, what will travel look like for future generations?

Will people fly around the moon for a once in a lifetime experience, or summon a driverless car to guide them around a strange city? We explore the possibilities…

Richard Branson’s Virgin Galactic business has had mixed fortunes to date - not least the fatal crash of its SpaceShipTwo in 2014 - yet as testing continues, there is clear consumer demand for the experience. Over 500 people have signed up as potential customers, each committing $250,000 to reserve their seat on the ride to space.

The initiative is slowly gathering pace. In August  2016 the company received its first operating licence from the US Federal Aviation Authority, subject to further tests on its six berth SpaceShipTwo.

Brands can align themselves with forward thinking concepts

The reality would certainly offer a unique experience, and brands who are able to forge the right partnerships and offer the trip as a premium travel prize would not only put themselves in the spotlight, but would imbue themselves with futuristic and state of the art credentials.

Interested in learning more about aligning with forward thinking promotional prizes? Click below for a copy of our ebook:

Win a chance to view the earth from space!

Imagine offering a competition winner the chance to travel at three and a half times the speed of sound, before becoming weightless as they coast towards space while viewing earth from above. Imagine too, inviting them to share their experience on social media via your brand, documenting everything - from the moment they change into their flight suit to boarding the spaceship.

And it may not be far off - Branson has said that he will be “very disappointed” if the company hasn’t had a test flight by the end of this year… And who knows, will we also see the development of moon resorts in the not too distant future?

Fly me to the moon…

But it isn’t just Branson who is pushing the boundaries of travel. Spaceflight company, SpaceX has pledged to fly two paying passengers around the moon in 2018, aboard its Falcon Heavy Rocket.

It is expected to be a week long trip, and as company founder, Elon Musk said in February, “It would skim the surface of the moon, go quite a bit further out into deep space and then loop back to Earth.” He estimates covering a distance of 300,000 or 400,000 miles. 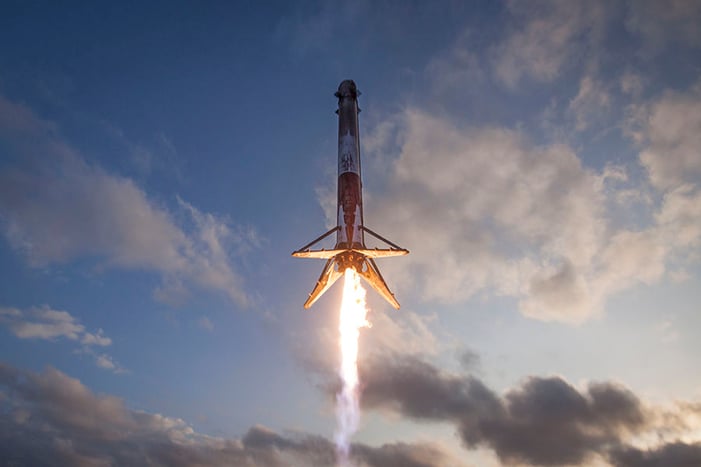 The future possibilities for brands to collaborate with such companies and offer access to what are financially prohibitive experiences for the majority are almost mind blowing. Like Branson, SpaceX is not just dreaming - its first crewed flights are expected to take place in mid-2018…

Or jet to New York from London for the day…

In fact, a host of travel innovation is underway. In December 2016 a newly designed hypersonic jet design called the Paradoxal was revealed - brainchild of Canadian engineer Charles Bombardier, grandson of the Bombardier founder. It is believed that it could take passengers from London to New York in just two hours - a trip that currently takes eight hours on a plane.

Imagine offering prize winners a day trip to New York, with brunch, shopping, dinner and a Broadway show, before being back in London for lights out…but that’s not all.

Give consumers their first suborbital experience

The speed of travel would be enabled by a brief trip into suborbital space, with passengers enjoying a view of the stars and the earth’s curvature - not to mention a passing sensation of weightlessness - before landing. There is even talk of a large panoramic rooftop…

Unlike SpaceShipTwo and SpaceX, Bombardier’s idea might be a few years, if not decades, away, but it is certainly food for thought.

Driverless cars are no longer the stuff of fiction

But it isn’t all about heady concepts. Driverless cars are also fast becoming a reality, with car manufacturers estimating that the first highly to fully automated vehicles (AV) will be available between 2020 and 2025.

There has been a lot of activity in this space, with many big car manufacturers forging strategic partnerships to enable them to enter the industry. Most recently, Apple also announced that it is working on driverless cars.

With 94% of car crashes resulting from human error (source: National Highway Traffic Safety Administration), AVs promise to reduce this figure. It is also believed that they will make people more mobile and productive, as well as reducing emissions and congestion.

In theory it will mean faster, safer, cleaner journeys, and tourists will likely be able to book a seat in a private or shared AV at the touch of a button, travelling from airport to hotel, or hotel to destination, cheaply and efficiently.

Sleep, read, work - or work out - while you travel

Some driverless cars may even have sleep pods, TV rooms, desks or even exercise bikes and treadmills, allowing passengers to make best use of their time while they travel.

Will brands be able to offer consumers the chance to travel in a personal AV from one end of the country to the other, offering an affordable branded luxury experience, without human intervention?

The reality is on the horizon. Driverless car trials on public roads will begin in the UK later this year…

Want the chance to travel like a hockey puck?

There are other nascent concepts too. The Hyperloop One, for example, is a concept which propels a pod-like vehicle through a reduced pressure tube to reach near-supersonic speeds. In reality, that could mean travelling from London to Edinburgh in half an hour. Or Manchester to London in just 18 minutes.

Another brainchild of SpaceX, the idea would see pods gradually accelerate to cruising speed before gliding above a track using air bearings. SpaceX founder, Elon Musk describes it as “a cross between Concorde, a railgun and an air hockey table.” Quite mind boggling.

Supersonic travel in a city near you?

The first public test of the system was completed in 2016, and the UK Government has reportedly mooted the idea of bringing the transport to the UK, with various cities bidding to be the first to test the technology.

Brands can tap into a host of new ideas…

Not only do the methods of transport themselves offer an opportunity for brands to surprise and delight consumers, but the speed at which travel can potentially be achieved opens up huge possibilities for brands to create extensive travel experiences more affordably.

Some of the concepts may never be realised, but a number are most definitely on the horizon…

Want to be prepared for that eventual horizon? Click below to grab a copy of our guide to promotional prizes, including some mind-bendingly awesome travel experiences...