The Cycle to Work Scheme boom

Movement towards a more sustainable and greener commute has been a topic of focus for many local councils and government bodies across the country for some time now. With changes in the environment, calls for action to combat congestion and implementation of better infrastructure, the cycle to work scheme is now more relevant than ever.

Last year the government launched a £2bn cycling and walking investment to help with cycling infrastructure across the country alongside schemes to  encourage UK citizens to get out on their bike, or walk to work. As part of this scheme there was an extremely popular “fix your bike” voucher scheme that sold out numerous times.

During 2020 the UK saw the highest level of cycling on the public highway since the 60s. There was in fact close to a 50% (45.7%) increase of cycle miles since the year prior, this is in no doubt as an effect of the COVID-19 pandemic.  With this upward trend in cyclists on our roads, the cycle to work scheme is more relevant than ever for employers around the country. 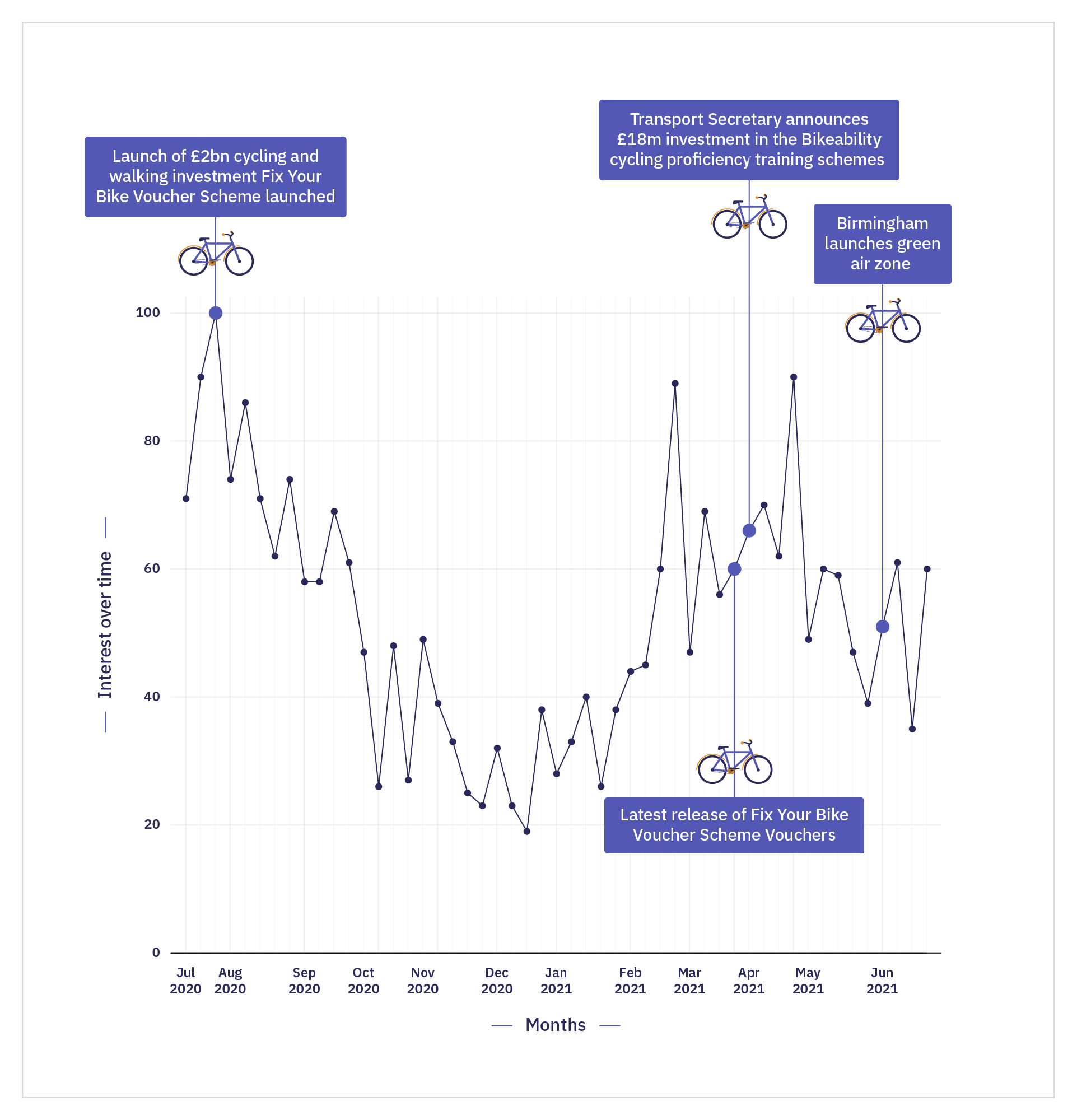 Above you can see a year in search interest around the cycle to work scheme across the country. Naturally we see a slight dip in interest in the winter months however there has been a consistent interest in the scheme throughout the past year increasing in areas due to announcements and infrastructure changes.

When it comes to interest in the scheme, London tops the charts with a huge monthly average search volume of 16,780. This is no surprise with the extensive investment into cycling infrastructure and the draws of commuting by bike within the city.

Bristol was the second most interested city with an average of 1,650 searches per month. Bristol is currently moving towards a more integrated cycle system within the city and is going ahead with plans to remove parking spaces to make way for new segregated cycle lanes between the city centre and the University of Bath. The city is also due to introduce a Clean Air Zone, although this has been delayed until 2022.

Glasgow takes third place, which is interesting following the announcement of the inclusion of dedicated bike carriages on some of its most popular routes between Glasgow and Oban. The new service aims to encourage commuters to leave their cars at home and opt for a bike/train hybrid alternative.

There is a general theme across the bigger UK cities of movement towards cleaner and more sustainable hubs. Therefore interest in the cycle to work scheme is only likely to increase with more infrastructure and new avenues for citizens to utilize. You can find out more about Sodexo’s cycle benefits here.

Methodology:
We used tools such as Google trends and Google keyword planner to pull the search trends and average search volume across some of the most populated cities in the UK. Using search terms such as “Cycle to work scheme” and “Cycle to work scheme calculator” we were able to determine the city with most interest in the scheme. Data was pulled 13/07/2021.